MyFitnessPal exercises and their identifiers

MyFitnessPal exercises and their identifiers

After logging a series of step entries via the API, if you were to look at your exercise diary on MyFitnessPal, you might see something like this: 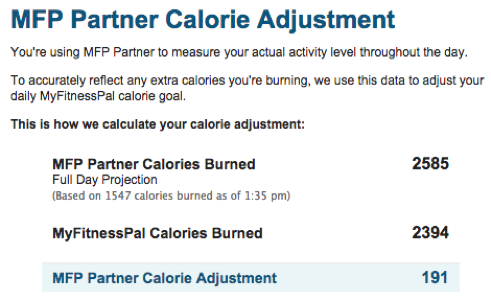 To fully explain these concepts, we must first provide a few definitions:

With the use of an activity tracker, a person can get a more accurate picture of their daily energy expenditure. In this scenario, MyFitnessPal creates a calorie adjustment to account for the difference between the tracker­measured activity and the BMR.

In the example screenshot, the ​MyFitnessPal Calories Burned​ is the user’s ​BMR;​ if the user were to log any discrete exercise activity, such as running, biking, or ballet, the energy burned during that activity would be added to this value.